One of the most exciting riders in FMX returns to competition in his home country with the return of Freestyle of Nations in Berlin, Germany, with Luc Ackermann confirming he will make a comeback from his most recent injury just in time

On the 24th/25th of February 2023, a new season of NIGHT of the JUMPs will see some of the biggest names in FMX almost touch their helmets under the roof of the Mercedes-Benz Arena in front of the diehard Berlin motorsports fans, who have had to wait more than 1,000 days for the Action Sports series to return

The Freestyle of Nations will see three teams competing against each other in different disciplines in Freestyle Motocross and MTB/BMX, collecting points throughout the night to crown the winner the first World Team Championship for 2023

In addition to the regular Freestyle Motocross Contest, where each rider throws down their best eight tricks in 90 seconds including the special ‘Double Up’, in the Best Whip Contest all riders will fly through the arena at the same time. In the Synchro competition, each nation provides two athletes who present their hardest tricks as synchronously as possible

The most intense competition will be the final discipline with the Best Trick Contest, featuring a rider from each country to attempt their most difficult trick. The team with the most points at the end is the new Freestyle of Nations Team Champion

Now the first athletes for the NIGHT of the JUMPs in Berlin have been confirmed. And every extreme sports fan in Germany has been waiting for this comeback. The German FMX World Champion and X Games Gold Medallist, Luc Ackermann will celebrate his comeback in the German capital after his cruciate ligament rupture in his knee on August 22nd, 2022. And since there will be another World Tour Champion in the world's longest running FMX sports series in 2023, Luc wants to bring everything including his Double Backflips, 360s and Tsunami Flips in Berlin.  He will be supported by fellow German and home-town hero, Kai Haase from Berlin. Kai will also celebrate his return from injury which he suffered on a huge 140 feet Freeride jump and will join Luc in Team Germany 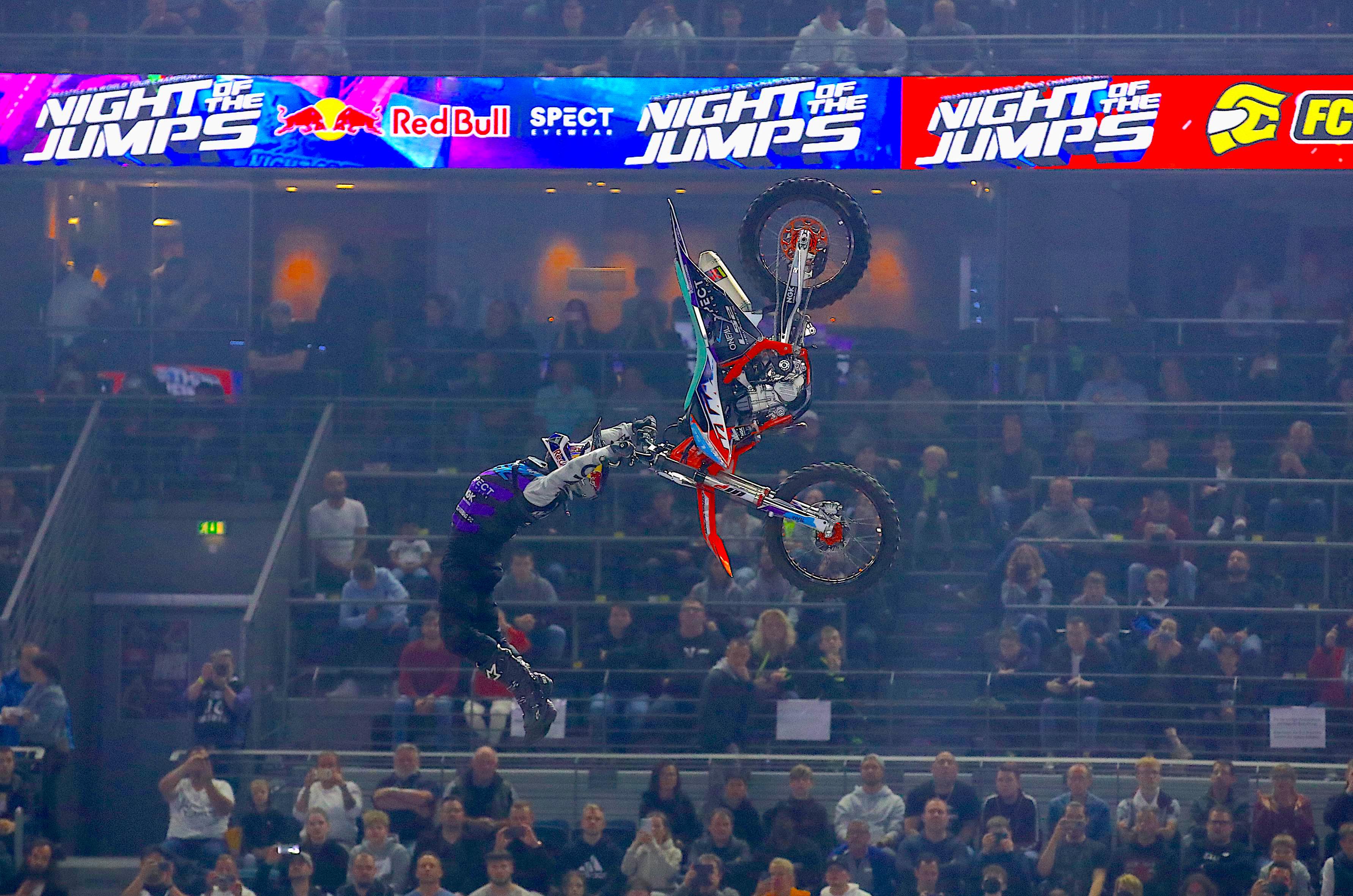 Team Czech Republic is led by Filip Podmol.  The "Young Ninja" is the brother of former FMX World Champion Libor Podmol and has already proven he’s not scared to throw the biggest tricks at the NIGHT of the JUMPs series. Filip will be looking to stand on the podium with the youngster at his side, with Matej Cesak, who caused a sensation at the NIGHT of the JUMPs in Basel 2021 by beating X Games gold medallist, Edgar Torronteras in the Best Whip Contest.

Team Brazil flies to Berlin for the first time from South America. Team captain Fred Kyrillos, Brazilian FMX champion and X-Fighters competitor, wants to put together a powerful team and fight for victory.

Special guest is the X Games Best Trick Champion from 2020 David Rinaldo from France. He will support one of the teams and perhaps we will even see the Bobby Spin body varial, with which he won silver in the USA, for the first time outside of X Games competition 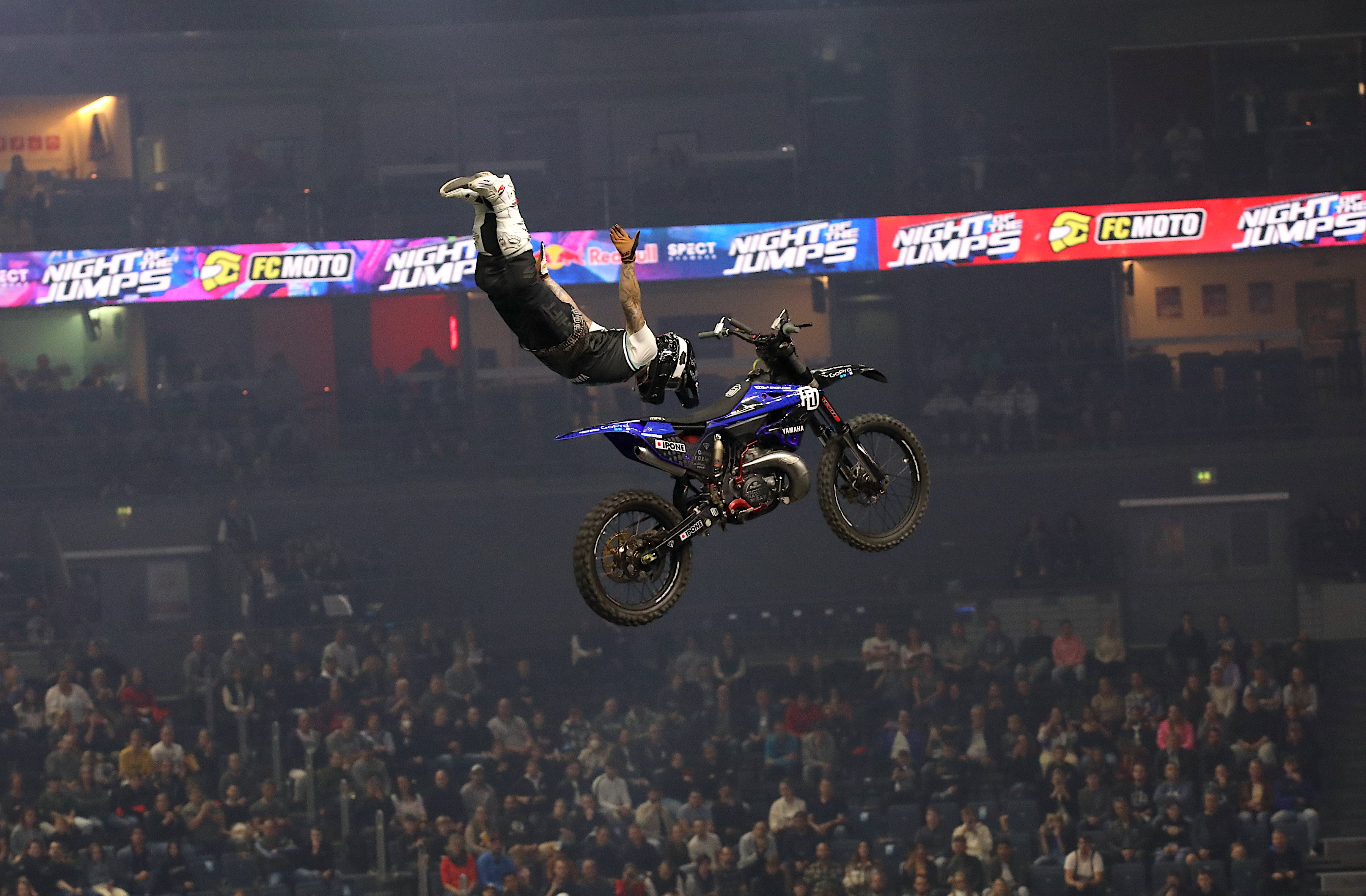 Two more firecrackers are already fixed for the squad of Mountain Bike and BMX riders. Thus, the FMX teams are each completed by a mountain bike athlete, who also collects points for the respective team in the MTB Best Trick.  From Poland, Szymon Godziek and Dawid Godziek, the famous mountain biker brothers with countless records, come to Berlin.  Dawid won gold at the X Games in 2022 and silver at the Nitro World Games. Szymon won silver at the Red Bull Rampage in the USA. The two world-class athletes will hammer out their hardest tricks. For the first time, Berlin could see a 1080 front flip live on the BMX bike

With over 300 NIGHT of the JUMPs® events worldwide in front of over three million enthusiastic fans in 22 years. Huge records, spectacular stunts and trick premieres non-stop. After three years, the world's most important FMX sports series finally celebrates its comeback in Berlin

The pre-sale for the NIGHT of the JUMPs in Berlin on 24. /25. February 2023 is in full swing. Tickets are available from €41.65 plus fees at www.nightofthejumps.com and all advance booking offices.

Back to the news overview